Cardiac tissue can be depolarized to initiate wavefront propagation by applying electrical current through an electrode located adjacent to the tissue. Excitation may occur near the anode as well as near the cathode during both the onset (make) as well as the end (break) of the stimulus. These excitation processes are governed by four distinct mechanisms: cathode make (CM), anode make (AM), cathode break (CB) and anode break (AB) [Roth(1995)]. Except for CM excitation which can be explained with basic laws of electricity in 1D, multi-dimensional active bidomain models are necesary to gain insights in all other cases. An overview of the evolution of transmembrane voltages in the vicinity of a physical anoder or cathode during and after delivery of a stimulus current is summarized below.

Cardiac defibrillation, as accomplished either externally or internally by automatic, implantable devices (ICDs), constitutes the most important means of combating sudden cardiac death. While ICD therapy has proved to be efficient and reliable, defibrillation is a traumatic experience due to the pain associated with shock delivery. Thus, research on defibrillation mechanisms, particularly aimed at lowering defibrillation voltage, remains an important topic. Advancing our understanding towards a full appreciation of the mechanisms by which a shock interacts with the heart is the most promising approach to achieve this goal.

Internal defibrillation by ICD therapy is administered in two different forms, either with transvenous (TV-ICD) systems where electrode coils are inserted in the cardiac blood pool, or with leadless subcutaneous (S-ICD) systems where electrodes are implanted under the skin. The S-ICD system offers advantages, but owing to the wider range of feasible implant locations rationalization of an optimal lead placement is more challenging. 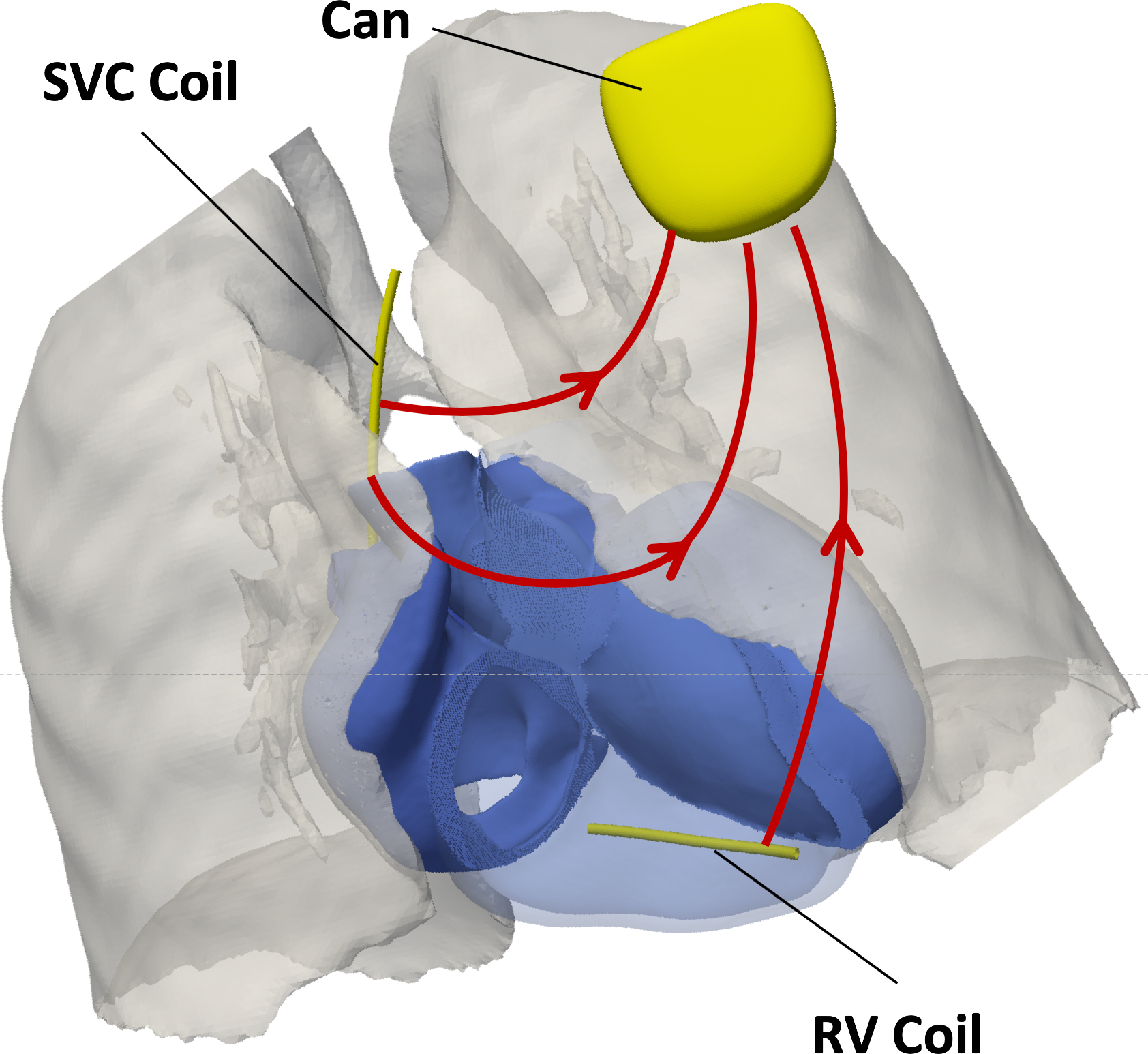 Reasons of success or failure of defibrillation shocks are multifactorial. Shape, size and location of electrodes as well as the timing (relative to an ongoing reentrant activation pattern), polarity, duration and waveform of the shock pulse play important roles. As ICD shocks are delivered by capacitive discharge, the exponential decay of waveforms is governed by the tissue's impedance governing the current flow between coils and can. The impact of the shock-induced electric field on the myocardium depends on on field strength \( \nabla \) and the spatial heterogeneity of the field as quantitatively by the activation function:

The many factors involved, combined with the variability of reentrant activation patterns and structural/anatomical factors renders ICD therapy a complex optimization problem.